This page is dedicated to the spirit of Hamtramck. Some of the stories consider the enduring characteristics that are unique to the city while others reflect on major changes, politically, economically and socially. 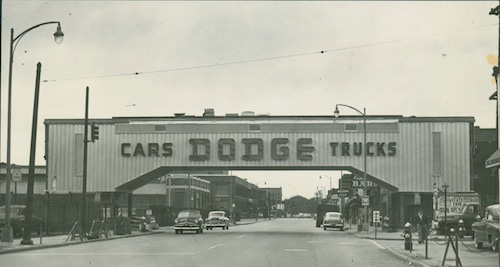 The overpass at Dodge Main, 1954. Courtesy of the Hamtramck Heritage Collection.
Abdul: First thing, assembly plant, it's in Hamtramck— Dodge Main, it's called Dodge Main, I think. You know, if you go back to, you know whats the name of that plant over here, it's called Dodge Main. It was two line. Every one minute, two car they built. Yes, every minute. Two car because there are two line. Yeah, its lot of people and when anybody come because it was help wanted. That time, lot of, lot of factories they need people to work and they said the Yemeni people they are good worker, they hire them. It's easy to, to get job before in factories.

Growing Up in Hamtramck

Interviewer: So have you felt like— especially at the beginning living here— that there was resistance by the Polish people that were here towards buying buildings, developing the community, building mosques? Or were people open to it?
Abdul: The was good people, you know, because, you know, they knows, they knows where they come from and they knows where people come from. And they was good. [Speaks Yemeni]
Interpreter Omar Alkusari: He said the relationship between them was mutual respect and cooperation.
Abdul: But after that when we came over here and a lot of people, they start moving. Polish people, they like to move different place. Not from the— I don’t know it’s because the people but because they changed the area, they want a different place. Like they went to Sterling Heights.
[Islamic Center of Hamtramck member interjects: A lot of people moved from Hamtramck because they didn’t have like shopping centers, have malls, you know what I mean? That’s the main thing. I heard it from a lot of people.]
Abdul: Lot of, lot of people now is in Hamtra— Polish, they don't want to leave Hamtramck because they like Hamtramck. It’s called Polish Town.
[Islamic Center of Hamtramck member interjects: Polish city, yeah.]

​Abdul: I like to stay in Hamtramck because there’s a lot of culture. My kids they learn more when they go in to some places else.
Abdul: 20 dollars it was long time, gets only 5 minutes.
Omar: Wow. Like you’re still talking, getting to the--
Abdul: Yeah.
Omar: —juicy parts of life, and the phone— the card just stops.
Abdul: Now, it’s you call free. You could stay 1 hour, 2 hour, whatever, every time, but if we got that’s long time, it’s better.
Omar: People used to spend hundreds of dollars on--
Abdul: Yeah!
Omar: —phone cards. Like people that were like getting married over there, they’re over here, they would like call their wives, like every day they would call their wives, like 20 dollars, 5 minutes but they would spend 40 dollars a day just to call and say “Hey, how’s everything going?”
​Abdul: Yeah, I used— I used to call when I get home, you know, from work, I feel like to stay, and you call from the— dialing sometime— from the house, “Hello, hello?” But now you could call any time you want.